CONDITIONS FOR ENTRY TO BOSNIA AND HERZEGOVINA

A foreigner who meets conditions for entry to BiH prescribed by Law on Aliens, may enter BiH if he/she at the BiH Border Crossing Points presents any of the following:

Exemptions from Article 2 of the Decision, foreigners who may enter Bosnia and Herzegovina without presenting a negative test result or certificates are:

By the Decision on prescribing additional conditions for the entry of foreigners into BiH, it is not prescribed what kind/type of PCR or antigen tests, i.e. form of tests or certificates is required to present at the border crossing points during intended entry to BiH, and it is possible to present them in printed or electronic form.

Remarks: Currently, when entering Bosnia and Herzegovina, no quarantine or self-isolation measures are prescribed, while upon entering Bosnia and Herzegovina, all persons are obliged to follow the instructions and respect all orders of the competent epidemiological and health authorities (social distance, protective masks, hand disinfection, etc.). 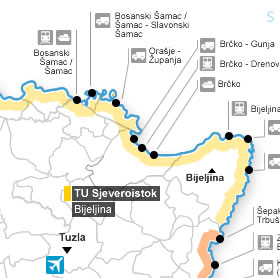 Interactive Map of Organizational Units of Border Police of BiH